We had a fun meeting this past Wednesday. Ed taught the Stop The Bleed program and everyone who participated was certified. We also found out our CERT Trailer is out of commission for a while as some adjustments need to be made to it. For the time being the La Palma trailer will be our primary trailer. And we are planning a joint Seal Beach / Los Alamitos RACES exercise on May 4th. We will be practicing with our Team radios and relaying messages through the RACES Team back to the SB EOC. This promises to be a great day of fun and active skill improvement.

We are also invited to attend the California for All CERT Conference in San Diego from Thursday 5/30 to Saturday 6/1. This is a pay your own way event and you can find the details on pricing and lodging here: https://westcountycert.com/ca4all  Please let Art, Brian, or Loree know if you are interested in attending.

Mark your calendars for our next Team meeting on April 10th in Los Alamitos. 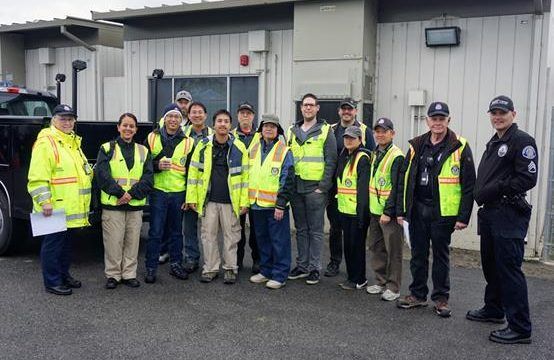 It was a rare rain filled morning in Westminster, but by shortly after 9:00 the showers had stopped and the sun was shining down on the seventh annual Little Saigon Tet Parade. The parade celebrates the lunar new years and Year of the Pig. The annual event is hosted by the City of Westminster and organized by the Vietnamese American Federation of Southern California.

Sgt. Drinnin, Westminster PD, would like to thank our Westminster RACES and West Orange County CERT volunteers for their hard work and dedication in supporting the Westminster community in the TET parade. Despite the heavy rain at the start of the event it turned out to be a sunny day.

West County CERT Members: Barbara Ames, Herme Asido, and Chi Nguyen who is also the Westminster Chief Radio Officer, paired up with the Westminster RACES volunteers to monitor parade activities. We were able to use the RACES radio in the Urban Area Mobile Command Post (below) which was monitored by Assistant Chief Radio Officer, Adam Valek. Thanks to everyone for a great job!