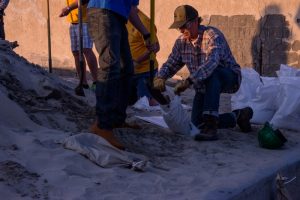 The City of Seal Beach requested the assistance of West Orange County CERT in filling sandbags that could be used by residents of the City of Seal Beach in event of their need for flood prevention in anticipation of the heavy rains expected on 02/17/2017 according to the National Weather Service.

West Orange County CERT responded to for the 10th sandbagging event “Operation Sandbag X” for the City over the past few years.  Seal Beach Public Works had provided sand and sandbags for this operation, as well as wooden pallets on which to store the completed sandbags. The Lions Club of Seal Beach, members of the Seal Beach Police Department’s Explorers came out in force to fill the bags. After a brief demonstration and safety discussion lead by Wink Chase, the group began filling sand bags. By the end of the evening, 904 sandbags were filled, tied, and stacked on the pallets. Before the Team left the beach at about 8:00 p.m. more than 50 sandbags had been picked up by nearby residents who were concerned about flood waters reaching their homes.

ABC Channel 7’s Eileen Ferrer videotaped the operation and her news presentations appeared at various times on Channel 7 throughout the evening and into the next day.