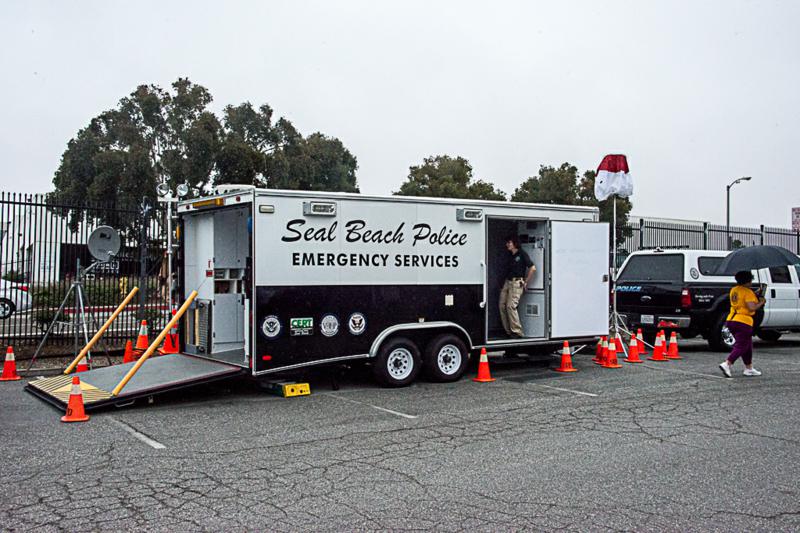 The day started out overcast and drizzling. There was so much drizzle in fact, some people were using umbrellas. By 10 when the Open House kicked off, the drizzle was gone and people were ready for the station tour and to check out the booths and activities. The Emergency Services “CERT” Trailer was set up and ready to go right about 9:00 which let the 8 Team members help out the other groups who were setting up. 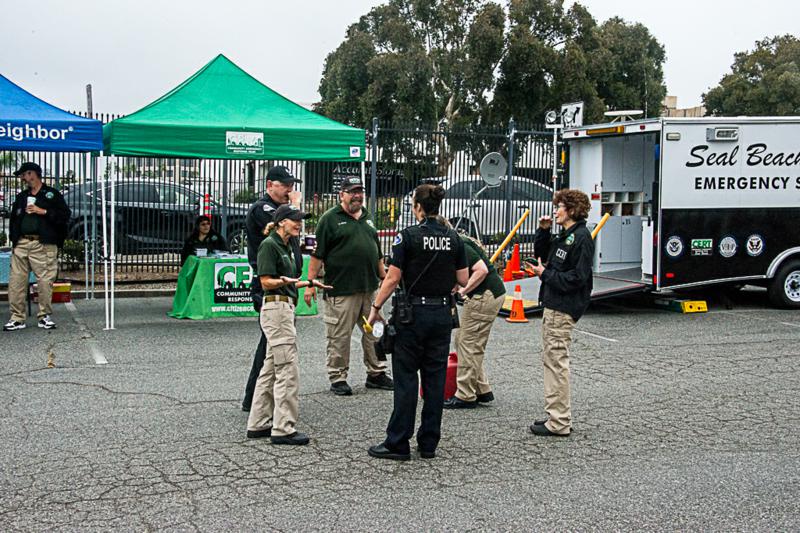 The Station tour was once again a very popular activity. There was a line forming well before the 10:00 opening and continued most of the day. The Department VIPs (Volunteers In Policing) and officers guided the tour groups of 10-15 though both floors of the station. At various places along the tour route, a member of the Miss Seal Beach Court spoke to the group informing them about the area they were visiting.

The tour covered the Administration, Records, RACES (Radio Amateur Civil Emergency Service)and the Detective Bureau before arriving at the WestComm Dispatch center (WestComm is a combined 911 dispatch center for the cities of Seal Beach, Los Alamitos, and Cypress), where an off duty dispatcher about the call center, its call volume and how the center is staffed. The tour then left the main floor and headed downstairs to the police locker rooms, staff fitness room, and the jail. Enjoy the tour photos below.

There were a number of demonstrations during the day as well. A Police Helicopter from Long Beach PD dropped in for a visit thrilling attendees of all ages.

The joint SWAT unit (officers and staff from Seal Beach, Los Alamitos, Cypress, and Fountain Valley Police Departments make up this elite joint team) under the direction of Sargent Mike Henderson, demonstrated the use of a “flash bang” disorientation device. If you look carefully at the series of photos below, you can see Sgt Henderson (third person in the group) toss the flash bang, it’s in the air, lands on the ground and blows the mat away when it goes off with a bang and smoke.

The Cypress K9 unit put on an excellent presentation one how police can use trained K9 officers to do what human officers cannot do – at least not as easily.

And lastly, the Department showed off a couple of it’s state of the art drones, wowing the young with aerial maneuvers and seeing themselves on the big screen. These drones are used by the Lifeguards to fly over swim areas looking for sharks as well as struggling swimmers who may be hard to see from shore. The police department use these to get overviews of accidents and to gather intelligence information when it is not safe or practical for an officer to do so.

There was a lot of fun had by everyone who attended the 2017 Seal Beach Police Department Open House. Enjoy so some candid shots from throughout the day and plan to join us for our next Open house Event!

And just for good measure, here’s Fritz Campbell who was recently awarded the 2017 CERT member of the year